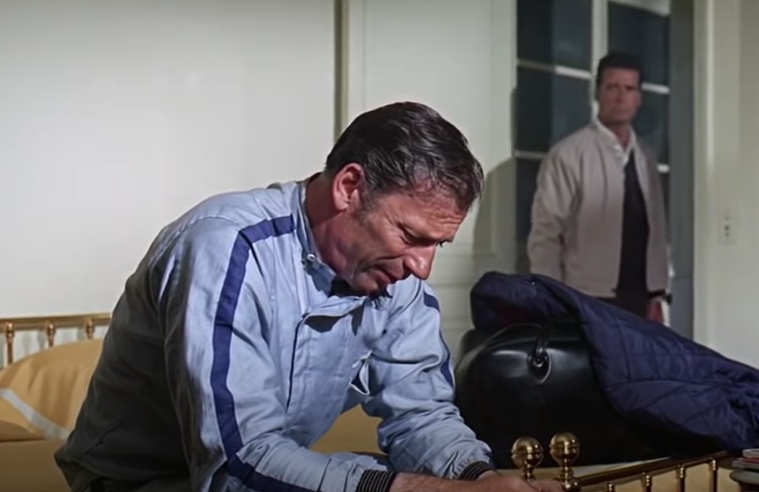 I am not a car guy or into auto racing, and definitely not into racing movies; however, when a film is directed by John Frankenheimer and stars three of my all-time favorite actors (Toshiro Mifune, James Garner, and Yves Montand), I am there no matter what. As it turns out, Grand Prix is about far more than racing, and that’s why the movie found its way into my collection years ago.

If you are hesitant about racing movies, too, consider Saul Bass’ opening sequence: a close-up of an exhaust pipe, exhaust billowing into our faces as the engines rev and roar, the potential energy dying to be released at a couple hundred miles per hour. One can almost smell the gasoline. With each push of the pedal, adrenaline is fuel-injected through our bodies. In that seemingly simple way of beginning, it gives us a clever glimpse at the pressure and danger of the racing profession.

Grand Prix begins with the famous race in Monte Carlo, pitting Pete Aron (James Garner) against teammate Scott Stoddard (Brian Bedford) and rival Jean-Pierre Sarti (Yves Montand). Through some unfortunate events Aron and Stoddard are involved in an accident that leaves Stoddard near death and Aron’s career potentially over, as Sarti wins the race.

Although Garner may be the biggest star (for most Americans, anyway), and there are a few storylines to follow, this is Yves Montand’s film in a very real way. It is Sarti’s story, not Aron’s or Stoddard’s, that is at the heart of the film. Aron and Stoddard are about the competitive nature of the sport, but Sarti’s story is about the psychological weight of the sport. After the race is complete, Aron visits with Sarti in a hotel room before leaving.

Sarti: Pete? Do you ever get tired? Of the driving?

Sitting on the edge of a bed, smoking, still covered in crud from the track, we can see the weariness in his shoulders, and we can hear it in his voice.

This is the moment that defines the film for me. It is this, even more than Scott’s accident, that drives (no pun intended) the film forward. When Scott is in his hospital bed, and his wife, Pat (Jessica Walter), is speaking to him about the reasons he races, we are seeing that it isn’t racing that is the difficulty for these men. It is life. Scott’s scars will heal, he will walk again, and he will get back into a car even over Pat’s objections. But Sarti’s exhaustion is what can’t be overcome no matter how fast he drives.

At about the 40-minute mark of the film, he gives a moving speech from behind the wheel of a classic car about how “…there is no terrible way to win, there is just winning.” In this moment with his new-found-love, Louise Frederickson (Eva Marie Saint), at a party after Stoddard’s crash, Louise wonders at the coldness of having a party while one of Sarti’s colleagues is fighting for his life. “If he were dead, it would be the same. More subdued, perhaps, but the same.” And in perhaps the most poignant moment: “Before you leave, I want to tell you something. Not about the others. But about myself. I used to go to pieces. I’d see an accident like that and feel so weak inside that I wanted to quit. To stop the car and walk away. I could hardly make myself go past it. But I’m older, now. When I see something really horrible, I put my foot down. Hard. Because I know that everyone else is lifting his.” Before the subject of Stoddard comes up, Sarti is sitting upright and almost jovial. Once Stoddard is mentioned, his body language changes; he is practically slumped over the wheel. It’s the same weight that was on his shoulders in the hotel room earlier. This is the real Sarti.

In a race sequence later on, Sarti crashes, killing two young spectators. There is obvious anguish on his face in the immediacy of it. But, while talking to Louise about needing to go to Modena to work on a new car, instead of taking her to Paris as planned, he is “putting his foot down” rather than lifting it; he’s driving hard through what has happened. However, just before the end of the scene, we see him lift his foot a little, allowing the event to catch up to him as he lets himself feel and break down in Louise’s arms.

Sarti hasn’t allowed himself to feel anything other than the power of the car underneath him and the excitement of competition for so long, but he’s slowing down, getting older. He tells Louise that his life is a problem and that he’s starting to see the absurdity of it; he sees what racing and competing is doing to all of them. He talks about the ghoulishness of the photographers after Pete Aron’s car catches fire in an earlier race. He knows that people want to see the disasters he now hates so much, but he also knows he can’t stop.

Before the final race of the film, Sarti says he doesn’t want to get into the car because he wants to stay with Louise. But he says he’s older and that it takes longer to move from one habit to another. We know that Sarti will still get into the car, and that he won’t finish the race. He dies in a spectacularly gruesome crash that you will need to see for yourself. Louise rushes to the ambulance carrying him away, and she gives the photographers exactly what they came to see.

With a fitting bookend, there is a voiceover of Sarti’s question to Pete about being tired. We don’t need the reminder, necessarily, yet it is still an effective way to draw things to a close. By the end, it is also we who are tired. There is asphalt, and rubber, and grime covering our faces, and having witnessed what we have for the last three hours, we are as emotionally spent as Sarti.

So here we are, over a year removed from my last piece and I’m once again going to talk about how a movie has a very personal impact on me. Let’s talk about the 2016 film, Christine, starring Rebecca Hall. It is the tragic story of TV reporter Christine Chubbuck.

END_OF_DOCUMENT_TOKEN_TO_BE_REPLACED

Carpe diem. Seize the day. Like so many others, I adopted the motto after seeing Dead Poets Society for the first time so very many years ago. It came out just a few months before my 15th birthday, and it had a major impact on me just as much as it did with the impressionable young men in the film. It still has an effect on me 29 years later, but for far different reasons. The following is more about me than it is about the film.

END_OF_DOCUMENT_TOKEN_TO_BE_REPLACED

Nuns are hot and dangerous!

END_OF_DOCUMENT_TOKEN_TO_BE_REPLACED There have always been discussions about who will be the next James Bond. Always contentious, the discussions are simultaneously fun and infuriating. This piece will take a quick look at someone who never even had a chance: David Farrar.

END_OF_DOCUMENT_TOKEN_TO_BE_REPLACED

Ashley and I were able to sit down and discuss The Exorcist the other day. It may not be scary for everyone, and that’s okay, but it’s a beautifully-shot movie regardless. And we came to the realization that horror is a lot like comedy.

END_OF_DOCUMENT_TOKEN_TO_BE_REPLACED Okay, maybe not. I went into the discussion of There Will Be Blood thinking that we were going to spar a little bit, but it turned out that we were eye-to-eye on this a lot more than I would have assumed. It doesn’t make for the deepest or most thorough conversation or analysis, but we came to a surprise revelation at the end.

END_OF_DOCUMENT_TOKEN_TO_BE_REPLACED

L.A. Story (1991), written by Steve Martin and directed by Mick Jackson, is an interesting mix of absurdity, fantasy, and love. So it’s basically Shakespeare.

END_OF_DOCUMENT_TOKEN_TO_BE_REPLACED

I like to see movies by myself and sit in the back row, center seat. Hence the blog’s name. However, it’s fun to talk to others about movies, so Ashley and I are teaming up fairly regularly to talk about what movies we like or don’t like. I’ve been struggling with a name for this, so she suggested “Sharing the Back Row”. Let’s see how it works! This week, we talk Hail, Caesar!, by the Coen Brothers.